I would have to say that most patients I come into contact with will vaccinate their children and themselves, however there have been an increasing number of anti-vaxers emerging.  Their argument against vaccinations range from ‘wanting to be immune the natural way’ to vaccinations causing autism.

What is a vaccination? Let’s start by looking at our immune system.  When we get infected by a bug our body’s immune cells first recognize this bug, then start marking clones of themselves who also recognize this bug and before you know it you have a whole army of immune cells ready to fight this one particular invader.  This takes time, so we often get sick waiting for our bodies to build their army.  So how does a vaccine work?  A vaccine works by injecting into the muscles an ‘inactivated’ part of a bug (usually a virus), the body then recognizes this bug by its shape and starts to form an army of cells ready to attack.  As a result, when you do come into the contact with the bug, your body already has an army of immune cells ready to fight and will kill the bug before you even get sick.  Vaccines are very effective and despite popular belief, rarely cause side effects.

Vaccines can cause a fever, more often in children. The fever is not a result of the inactivated bug that is injected, but rather as a result of the immune system preparing itself.  After the immune system recognizes the bug and it builds an army, it also releases proteins called ‘cytokines’ that are responsible for the fever.  Sometimes this fever (although rarely) can cause febrile seizures in children, this can be scary for parents but in the majority of cases is harmless.  Children will not go on to develop epilepsy as a result of febrile seizures unless they already had a predisposition prior to the febrile seizure.  I should also mention that getting the virus also has the same, if not higher risk of febrile seizures.

What about autism?  In 1998 a guy named Andrew Wakefield published a research paper in a distinguished journal called The Lancet and claimed that there was a link between the MMR (measles, mumps, and rubella) vaccine and the appearance of autism (and bowel disease).  After its publication other researchers were unable to reproduce his findings or confirm any link between vaccination and autism or bowel disease.  There were undisclosed financial conflicts of interest on Wakefields part and most of his co-authors withdrew their support for this study’s findings.  An inquiry was then conducted into allegations of misconduct against Wakefield.  His misconduct included dishonesty, falsified manuscripts and abuse of developmentally impaired children.  These children were subjected to invasive medical procedures such as colonoscopies and lumbar punctures.  As a result in 1998 The Lancet fully retracted the publication.  Wakefield was then barred from practicing medicine in the United Kingdom.  Unfortunately this falsified research led to a drop in vaccination rates and a corresponding rise in measles and mumps that lead to serious illness and death.

Another common argument is that parents have never seen disease like polio or rubella, so why risk vaccinating my children?  It’s a simple concept, something we doctors refer to as ‘herd immunity.’ This means that those who are unvaccinated are protected from diseases from the simple fact that everyone around them is vacc 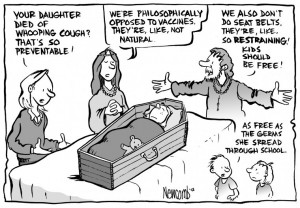 inated so the disease cannot spread from person to person.  The problem is when less and less people vaccinate, the less and less herd immunity has an effect.  Herd immunity is meant to protect those that are unable to be vaccinated due to medical reasons and young babies that are too young to be vaccinated.  A disease such as whopping cough may produce little effect on an adult or an older child but is life threatening in young infants who cannot be vaccinated against the disease.  So it is very selfish to not vaccinate yourself or your children because you are risking the lives of others.

For anyone who thinks that vaccinations are a scam to provide pharmaceutical companies with lots of money, you are wrong.  Do pharmaceutical companies make money from vaccinations?  Absolutely, just like they make money from chemotherapy, adrenalin and antibiotics.  So you can go ahead and die from simple treatable infections or anaphylaxis or you can buy the cure.  As a doctor I can guarantee that I make absolutely no extra money from vaccinating my patients, but in the long run it does save patients and governments a lot of money because it keeps a lot of people out of hospital and healthy.

What anti-vaxers often don’t release is that the effects of these diseases are far worse than any effect of a vaccination and they are risking their children’s lives for something that can so easily be prevented.  They often don’t realize the amount of danger they are putting themselves and their children in because they have not seen the devastating effects of these disease thanks to herd immunity and those who vaccinate.  We do not want to see re-emergence of devastating disease like polio and measles, please vaccinate!!